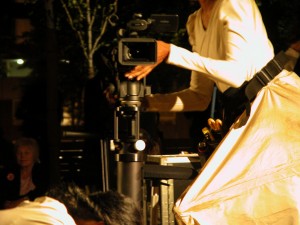 Fragments & Monuments have gained notice on both the local and global stage for their performance and film work about the first British Feminist, Mary Wollstonecraft (1759-1797).

Beginning in 2000 with a millennium party where ‘Mary’ (Mary Wollstonecraft) met Diana Princess of Wales F&M have followed ‘Mary’ onto Newington Green where she ran a school for girls around the corner from the F&M studio.

Plaque to Mary Wollstonecraft unveiled on Newington Green on International Women’s day this year. Watch out for projection of Mary Wollstonecraft on the Houses of Parliament October 2011 to launch the campaign to raise money for a memorial to Mary on the Green (http://www.maryonthegreen.org) 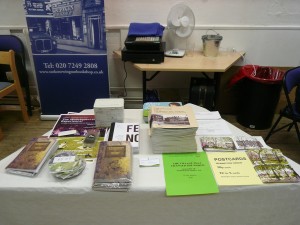 Sell out at Stoke Newington Literary Festival – we launched our new book ‘The Wollstonecraft Live Experience!’ by Anna Birch and Taey Iohe available from F&M at the knock down price £19.99.

Mary Wollstonecraft moved to Newington Green in 1782 where she published books on girls’ education and civil rights and wrote A Vindication of the Rights of Woman, a keystone in the history of women’s rights. Come and find out about local projects celebrating Britain’s first feminist, hear the ‘Fragments & Monuments’ artists talk about their new book, participate in Strangers in the Neighborhood- a collaboration between Anna Birch and Taey Iohe, and meet Roberta Wedge, Mary Wollstonecraft blogger. 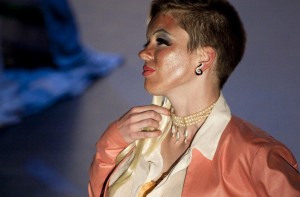 ‘POP UP’ suffragette block buster re- make premiere Hull May 2011

This performance is planned national and international tour. A Pageant of Great Women originally directed by Edith Craig fits between Judy Chicago’s Dinner Party, Cary Churchill’s Top Girls, Eve Esner ‘s Vagina Monologue and Nic Greens’ Trilogy. Come and celebrate this wonderful historic moment and the achievements of women in a theatrical and entertaining ‘pageant’. Women from history provide the evidence in a ‘court case’ to demonstrate the energy and commitment required to survive as a woman in todays world.

“Send us your favourite great woman!”

Fragments & Monuments re make this great play for an international and local audience to celebrate 100 years of The Pioneers Players. Participate in the procession of Great Women and become a part of the film.

-See photos of Liz and Di, a dream play, adapted by Anna Birch, for London College of Fashion, March 2009, from the original play by Di Sherlock

“I insulted her. I sent her inferior frocks.”

Where does one draw the line between the public sphere and the private sphere? What does the state have a right to know? CCTV cameras everywhere! And recently on the front of The Guardian we read that the “World’s most pervasive surveillance undermines basic liberties”, say Peers.

In this adaptation of Liz and Di by Di Sherlock the students at London College of Fashion and the staff team designed a mixture of performance, installation and film to examine surveillance and voyeurism from a trans-historical stand point. Was it really that different then and now? Elizabeth I had spies everywhere protecting her position as Queen and Head of the Church of England; Diana however, might have benefited from more protection but the English Royal Family, who disowned her at the time of her death despite her being the mother of the heir to the crown, thought differently.

From a personal point of view the students were excited by the internal pressures described in the script for women to conform to a particular body shape or lifestyle. This voyeurism that women and increasingly men are subjected to combined with a surveillance culture created challenges for the teams designing and making the costumes, make-up and technical effects that are celebrated in this show. See the photos on Flickr NOW!

Welcome to the astral plane!

At a very sunny picnic in September 2007 we projected the film ‘Wollstonecraft Live!’ and VINDICATION our 10 minute bio-pic featuring ‘Mary’, William Godwin, Richard Price and Tom Paine back onto Newington Green . New and old audiences laid out their picnics on mats specially designed by Art Director Tina Lonergan and listened to fabulous jazz from The Deidre Cartwright Trio.

Jana Riedel who has edited all our films since 2001 which can be seen now on youtube did everything to ensure VINDICATION was shot in 14 hours in a beautiful 18th century house on Newington Green. She is a very funky VJ seen mixing our archives using ISADORA soft-ware at The Wollstonecraft Live! picnic and our Creative Collaborator. Taey Iohe our lead artist for 2009-2011 celebrated the life of ‘Mary’ in Na Hye-Seok and Mary Wollstonecraft Live! at the prestigious Gyeonggi Museum of Modern Art, Korea.

Fragments & Monuments, based in Hackney, London began as a collaboration (since 1996) with Dutch scenographer Madelon Schwirtz, producing a trilogy of site-based productions in our first four years.